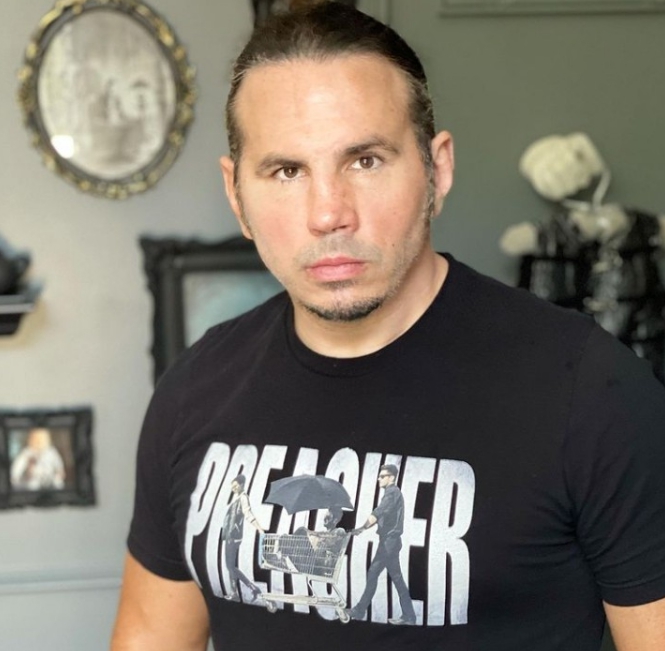 This was shared during his latest Twitch Stream, as Matt Hardy shared several details regarding his brother Jeff’s exit from WWE back in late 2021.

In the stream, Matt Hardy extensively talked about the incident at a December house show that got Jeff released. He also touch on how Jeff was stressed out and how he knew he “was done” when he jumped over that guardrail.

He said, “Whenever my brother ended up being released, he had taken a drug test. Usually, these drug tests come back in 10 to 14 days. Those 10 to 14 days had been up and he never got a rest and he was curious as to where his result was. He knew he had passed his drug test because he knew he hadn’t been doing any drugs and he has been clean, he’s been clean the whole while he’s been there. There was an issue where they said, ‘Jeff Hardy had this erratic behavior’ and he ‘jumped over the guardrail’ or whatever. Hello, he’s Jeff Hardy, he’s a weird dude. That’s kind of what he does. The erratic behavior is why they gave him a drug test and sent him home. He addressed it with me and, as he was saying, he knew at that point…working for WWE is a very stressful job. I am not going here to bury WWE, I love WWE, Vince McMahon, everyone who is there. I wouldn’t be who I am and I wouldn’t have this life right now. I have great appreciation and I’m very grateful for everything I’ve done for them and every opportunity they’ve given me. It’s all good, but it’s also a very stressful environment. Anyone who has worked there knows that. I feel Jeff was stressed.

When questioned by his wife Reby Hardy, Matt would go on and on to say that he did not believe that Jeff jumped over the guardrail with the intention of being released. Hardy remarked, “I don’t think he did it intentionally trying to get fired. He does sh*t like that all the time. There are times where we’re in the ring and he just goes into business for himself because that’s how he feels. That’s how he is. He’s a very, emotionally, supercharged person and he follows his emotions and instincts.”

Matt Hardy then go on to confirm several details regarding Jeff’s exit from WWE. This included that WWE offered him a rehab or release ultimatum. He also stated that Jeff consulted his lawyers to help him receive his test results after WWE took their time getting them back to him. Results that showed Hardy had tested negative. Matt would say the following:

“He took this drug test, he ended up being released a few days later. He never got the results of this drug test, he obviously passed all his drug tests. He was drug tested quite often when he worked there. It also leaked out that, he thought this was going to be a private conversation, they said with go to rehab or be released. They gave him an ultimatum. He said, ‘Okay, you can release me then, I don’t need to go to rehab.’ That was his mentality at the time. Three weeks later, he hadn’t got his drug test and he asked to see it and got it. He was fighting, scratching, clawing to get the drug test and he got the run around.

I am not going there to bury WWE, I love WWE, Vince McMahon, everyone who is there. I wouldn’t be who I am and I wouldn’t have this life right now. I have great appreciation and I’m very grateful for everything I’ve done for them and every opportunity.

What Are Spam Calls And Spam Messages? – READ

Getting To Know More About Nigerian Superstar DJ, Spinall.

Getting To Know More About Nigerian Disc Jockey and Producer, DJ Shabsy.